I received a call from a FSL parent, asking if he and his wife could sit down and talk to me. The day of the meeting rolled around and we began to talk when the parents pulled out two big folders that they had brought with them. The dad took out the first folder and inside was all of the awards his oldest son, Christian, had won throughout the years, including National Honors Society, science awards, and football scholarships. He said that before FSL, Christian had no vision for his future. FSL had changed him and allowed him to realize his dreams! Christian now has a 3.9 GPA, with a full scholarship to college.

He then pulled out another folder, full of awards of his younger son, Tim. Tim’s stack of awards was over an inch thick, putting in writing all that Tim has accomplished in his short life.

I let the parents know how proud I was of what Christian and Tim had accomplished over the years! The dad stopped me and proceeded to pull out his phone to show me recent pictures of Tim. In one of the photos, he had a busted lip! In another photo, he had a bruised eye! I couldn’t believe what I was seeing and Tim’s dad began to tell the story of how Tim got these marks on his face. “Tim got these for standing up for a small 6th grader who was getting beaten up. He decided to stand next to the student who wasn’t strong enough to defend himself. The bullies then attacked Tim, leaving him bruised and bloody.” Later that day Tim told his dad, “I would do that again in a heart beat.” Tim’s dad told me, “FSL instilled courage and integrity in Tim. It’s truly incredible!”

Two months later, the bully asked for Tim’s forgiveness. He said he wanted to be friends and was really sorry for what he had done before. Tim forgave him and the two have been friends ever since. From the lessons that Tim learned at FSL, he not only was able to set an example for his peers, he was able to help change another student’s life and offer the gift of forgiveness.

You see, this family has been through a very difficult time in the past year. Tim’s mom found out that she has cancer and will be undergoing surgery. Tim’s dad has had four heart attacks since 2009 along with kidney failure. He told me that if he doesn’t get a heart transplant in the next three years, he probably wouldn’t make it.

He told me that his wish this year was that Tim would be able to go to Summit Life Leadership Camp. He wanted more than anything for Tim to find a way to go because he knew how important it was to him. Financially, it just didn’t seem feasible for them to be able to pull together the money in time. In past years, Tim’s family had generously sponsored other FSL students to be able to go to camp, and this year, they needed some help.

I was deeply moved from what I was hearing and I knew that Tim had to be at camp this year. Through camp scholarships (awarded by generous donors and foundations), we were able to award Tim a partial scholarship and get him to camp. He was so happy. Tim had an incredible and life-changing week at camp and was given opportunities he might not otherwise have gotten. He guided his team through challenges and exhibited many leadership qualities throughout the week. Through his experiences with FSL and Summit Life Leadership Camp, Tim has returned as a FSL High School Leader and gives back to students the way his coaches gave back to him. 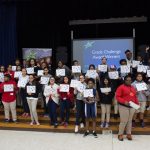