It was a great season at Five Star Life and we’re extremely proud of all of the students. The Student of the Year winner at one of our Texas middle schools wrote to us to share what this year at Five Star meant to her. With the program, the coaches and the encouraging students she worked with, she overcame obstacles from her past that she knows now how to deal with, and help others, in the future! Her story is below!

Greetings! I’m the 2014-2015 Student of the Year at Alief Middle School (Houston) in Five Star Life. I wanted to share what Five Star meant to me this year. Whenever I first started Five Star I was confused because I really didn’t know what I had gotten myself into. I felt uneasy about it in the beginning, but I wanted to just go somewhere to escape from my normal routine, so I wanted to give it a try. On the first day I was kind of like whoa! Everyone is happy, everyone is excited I was too, but I was just scared when I first got to Five Star because I was being bullied and I was insecure and afraid of what people said about me. After the first week I kept coming back because I wanted to find the real meaning of Five Star, aside from the games, I wanted to overcome so much. I wanted to achieve a lot. That’s why I joined Five Star. After two or three weeks I started getting comfortable. I started to realize I was part of the Five Star family. I was accepted by my peers, and my wonderful coach, Coach Toni. One week we talked about bullying and that week got me very emotional- I still remember the feeling. That was the day I still remember because I had support from Coach Toni and peers in my Five Star group. It was kind of scary for me to talk about my story to them but I was comfortable, I felt like I was in a safe place where I was at school and I could open up about my story. I always wanted to share it to help others that ever would or are going through it. I had hope when I joined Five Star. I built confidence, and I just felt a little bit happier.

During the weeks of the winter season of Five Star I started to get nominated for a lot of things like the Juniors National Leaders Conference in Washington, DC and the National American Miss open call. There was a lot I had earned. Five Star has made me more humble. Without Five Star I don’t think I could have moved past what I went gone through and forgiven my past to become the person I am today. Every award I win, every helpful moments I have with others, it’s because of Five Star. I have become a great person, I have become a person to encourage others on their journey’s to keep going no matter what gets in the way. Five Star has really became my second family. I appreciate every lesson I’ve learned while being in Five Star and I hope with this next season I will be able to learn more. I am proud to be apart of the big Five Star family. No matter what, I will never forget Five Star because this is where I’ve been at my best.” Thank you for recognizing me.
Thanks Again, 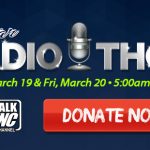 LISTEN TO THE RADIOTHON LIVE @ www.953MNC.comUncategorized